Yesterday I posted this on App.net:

Here’s a quote from the article:

“…annotated version, with thousands of academic notes, will aim… to show that Mein Kampf is incoherent and badly written, rather than powerful or seductive.”

I laughed out loud.

App.net’s (ADN’s) @blumenkraft, being German and with that country’s unique perspective, opined “it’s a peace of crap! i love they did the afford to set it into a historical context.”

To which I replied “My wife read it a few years ago, during a philosophy phase. At the time she told me pretty much what you and the article say. #NotOnMyBucketListForAReason”

ADN’s @jeremycherfas also responded: “The Economist’s article was a very good one.” So I did a quick search and came up with:

What the Führer means for Germans today: Seventy years after Adolf Hitler’s death, how Germans see him is changing. - a very interesting read.

Within that article, a reference to a novel:

“The latest bestseller is “Look Who’s Back” by Timur Vermes, translated into English this year. Hitler wakes up in today’s Berlin near his old bunker. Disoriented at first, he so amuses everybody he meets, including his Turkish dry-cleaner, that he is launched on a meteoric career as a comedian. His hip colleagues are convinced that he is a consummate “messed ekta” (Berlinish-English for method actor) offering a subtle critique of modern media culture.”

Me to Jeremy: “Thanks. On the strength of it I just grabbed a trial of ‘Look Who’s Back’ from the Kindle store.” I also added a screenshot of its cover. 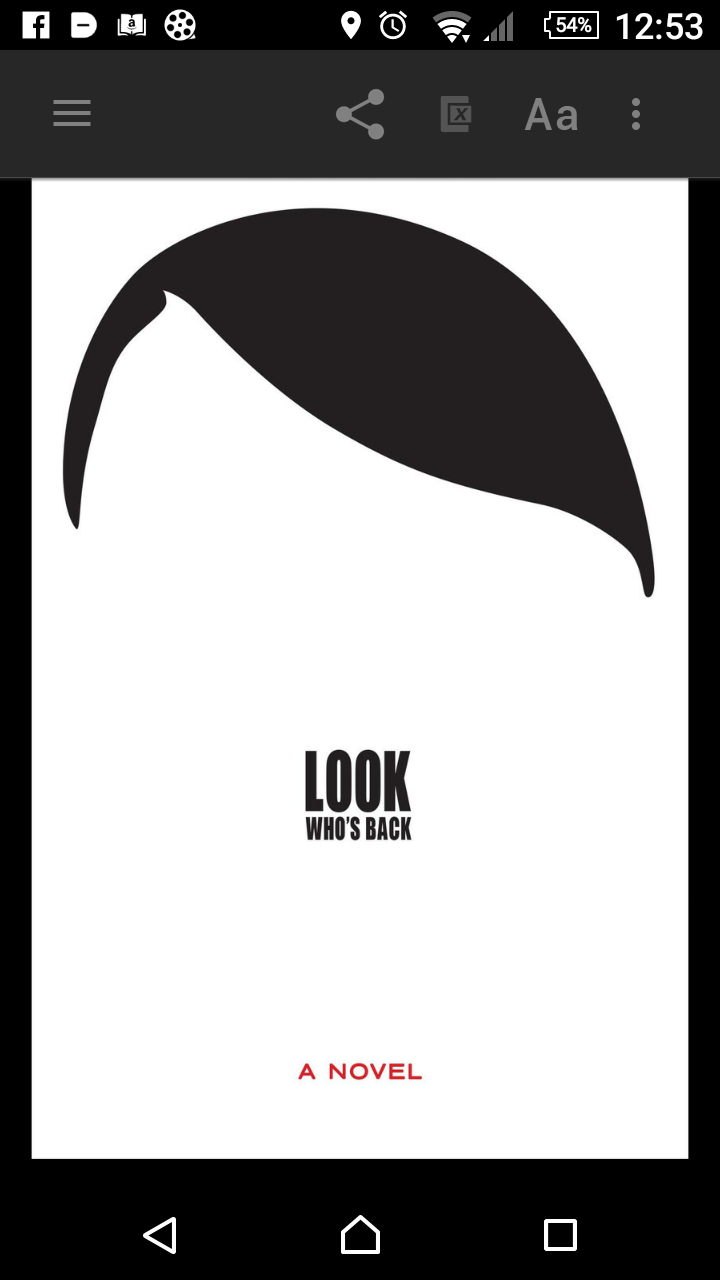 I read the introduction, laughed out loud again, read chapter 1 and settled nicely into chapter 2, at which point the preview ended. So I bought it.

Jeremy had asked me to report back what I made of the trial, and upon my few disorganised words said “Good recommendation. I might even add it to my own list. In fact, I will. I take it you’ve read Robert Harris’ Fatherland?”

Ah, no, I hadn’t read it, but I give thanks for his recommendation, but with reservations…

My focus for the last 30-something years had been predominantly sci-fi/satire/humour. ‘History’ tends to be restricted to the facts; I’m really not a fan of historical dramatisations (TV/film, whatever, Blackadder excepted.)

Prior to puberty I’d read children’s books, then gravitated through some of the English Classics, especially the more accessible Dickens, that sort of thing; and all the Reader’s Digest Condensed Books. All of ‘em. I was then a voracious reader (as is my oldest daughter today.)

And then I read my first Isaac Asimov; The Early Asimov - a boxed 3-volume set, acquired second-hand from a stall on Rochdale Market. The best bit of their transactions, aside from saving money over new; a return-for-half-purchase-price when buying more. Awesome! But financial transactions aren’t as important as the power of the written word when welded to a willing mind. Mine.

That led me to a long exploration of sci-fi. Bear, E.E. (Doc) Smith, Niven/Pournelle/Barnes, more Asimov, Brin, L.Ron Hubbard (his Battlefield Earth is a great book) and, well, suffice it to say it’s a big list. All gone now apart from a selection of Niven et al, and of course my Asimovs.

I read other genres, e.g. Tolkien, e.g. shed-loads of nonfiction, but nothing compared to the impact sci-fi had on me over time - for allowing me to escape.

It takes me three passes to fully explore a novel: a first quick skim, a later slower read, and months later a final deep exploration pf what subtleties remain. No, I utterly failed to on the one book: The Lord of the Rings. I’ve ‘only’ read it twice, though I attempted a third. (I’m no Christopher Lee!)

And then, when I least expected it, my wife-to-be arrived; with cats, responsibilities, children, and a consequent loss of free time and focus.

Back to the Hitler related novel; “Quite a departure for me, this…” I said to Jeremy, “…but this is still well within my comfort zone. Just opened my wife’s copy of Mein Kampf, compared it with my Churchill’s The Second World War. Actually there’s no comparison, but I might just flick through the former after the novel.”

Honesty time: I really didn’t get far into Churchill’s tome. But I’ve dipped in on the odd occasion as documentaries have appeared on the telly. Incidentally, when I can get a visually un-truncated version of The World at War, I probably will.

2016 sounds like it’ll be the year I make the time to read my queue. No more excuses.